Tentatively returning to outdoor shows as COVID continues to unfold for a second summer.  Please respect the space and safety of musicians and other venue staff at all events. 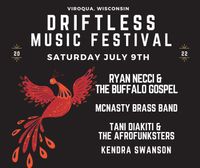 A Festival for All! The Driftless Music Festival in Viroqua brings professional, eclectic music to the Driftless Region by way of a free concert in Eckhart Park, Viroqua! Come join us on July 9th! 12pm-9pm, music starts up around 1pm with McNasty Brass Band, a collection of Minneapolis/Saint Paul based horn players and percussionists that fuse the Minneapolis sound with the spirit of New Orleans. The outcome of this fusion is hard-hitting dance music and high-energy live shows. At approximately 3:00pm Kendra Swanson will take the stage bringing her lively, folksome music: frailing banjo, rigorous guitar, soulful strings, and hearty vocals to boot. Her music distinctly embodies a truly roots sound from (and about) the heartland, with intimate reflections on its flora, fauna, and people. Following Kendra, around 5pm Tani Diakiti and the Afrofunksters will fill the park with West African blues, funk and rhythm. Tani is a musical force who has inspired an entire community of artists. When they start playing, the interplay between Kamale N'goni and jembe grooves so hard that audiences can't stay still - the urge to get up and move it too powerful! Lastly, at 7pm, Ryan Necci and The Buffalo Gospel will carry us into the night with their heartfelt and heartbreaking country & western and Americana arrangements. With a stellar cast of local and national musicians, critically acclaimed Buffalo Gospel delivers wholly original material that manages to feel utterly timeless. Their music is authentic and incisive telling stories of the human condition; of love and loss and broken dreams and the power of dogged persistence to overcome misfortune and heartache, in spare, direct discourse that cuts straight through to the core of our shared experience. An incredible end to a thrilling day! Food vendors at this years fest will provide a delicious variety of options, including pizza, BBQ, tacos, ice cream and more. All vendors utilize local and regional sources as much as possible for their offerings.

Be the first to find out what’s coming up during 2022-2023 at the Stoughton Opera House. The new season is announced on July 4th!

Food vendors will be on-hand to suit all tastes, from veggies to brats; and if you can't find something to make your tummy happy, it's a very short walk to tons of great local food.

Artists and sellers of goods will also be set-up and eager to say hello.

In addition to a range of non-alcoholic beverages there will also be beer, wine, and cider for sale. All proceeds will go toward keeping the Opera House operating, so your patronage is much appreciated. Please remember to bring a valid ID if you plan to drink while at the festival.

7:30pm DAVINA and the VAGABONDS

Kendra Swanson, hosted at the Biergarten at Olbrich Park by the Sugar Maple Music Festival. https://www.olbrichbiergarten.com/events

I'm excited to return to The Wagner House in my hometown of Freeport, Illinois. I'll be playing my enthusiastic music and singing my heart out to downtown Freeport on the patio. Come with friends, have a classy cocktail and some food. I'd love to be a part of a beautiful Friday evening.

Tickets and info: https://www.riveredgenaturecenter.org/program/frothy-forage/ I'll be returning to my former employer to swap tunes with local legend Terry King in the Sugarbush House. Riveredge’s Frothy Forage has become the premier outdoor craft beer, wine, and cider festival in the area. This event is truly unique as participants are invited to explore the great outdoors of Wisconsin by hiking through the forests, prairies, and wetlands of Riveredge while enjoying the best libations from local purveyors. The Frothy Forage is sure to leave you with a smile on your face. All proceeds from the event go directly to the restoration and conservation of Riveredge’s 402-acre natural sanctuary.

So excited to be returning to the Larryfest little stage for another wonderful year. <3

5pm, come for brats, hot dogs, snacks, deserts and beverages with music to follow at 6 PM. Bring your own chair or blanket to this event for all ages! Join us to welcome Kendra Swanson, the first Scientist-in-Residence at Cedarburg Public Schools, back to Cedarburg for a celebration of music and community in our new prairie.

Playing for this fantastic summer series in my hometown of Freeport. Free event, bring a lawn chair, buy some ice cream at Union Dairy next door, and get ready for some songs and stories.

Playing at one of my favorite local haunts! Indoors, so rain or shine!

Returning to the esteemed WI Cidery for some Independence Day weekend musings and tunes! Bring a chair and your favorite brimmed hat.

Date/time: June 5, 2022, 10:00 AM - 3:00 PM LOCATION TO BE UPDATED CLOSER TO EVENT ACCORDING TO COVID RESTRICTIONS AND WEATHER Please visit nwilaudubon.org for up-to-date information Saturday, June 5, 2021 Freeport Public Library, Debate Square & Arts Plaza (Douglas Street, Freeport) Schedule of Events: 10:00 – Exhibits and Activities for families; put on by Freeport Art Museum & University of Illinois Extension 10:15 – Earth based Yoga with Pat Leitzen Fye from Your Core Being (bring a mat if you prefer) 11:00 – Northern IL Raptor Rehab & Education– A program with Live Raptors! 1:00 – Hoo Haven – A program with Live Birds of Prey!! 2:00 – Music by Kendra Swanson: Kendra will perform on banjo, guitar, and fiddle, delivering an enthusiastic set of music that celebrates both flora and fauna, and includes original compositions for this Earth Fest event. Activities will be at the various locations listed. Wander around to see the activities and exhibits. If weather is not suitable, activities and exhibits will be indoors at the Public Library. The afternoon concert will be cancelled if it’s raining. Bring your lawn chairs or blankets to enjoy the presentations and concert. CDC COVID protocols will be followed. Please be prepared to mask and social distance. Check the NWIL Audubon Facebook page for updates or changes. In Partnership with: Freeport Public Library, Freeport Art Museum, University of Illinois Extension, Your Core Being, and Environmental Study Group.

Playing kid music for Brix Cider's inaugural brunch! Bring your mask to make your indoor orders, and bring the kiddos for some (adult friendly) kid music!

Kendra's first live show in over a year! Enjoy the beautiful outdoor space at Brix as Kendra opens up their music season. Masks required indoors where you can order fantastic food and beverages! 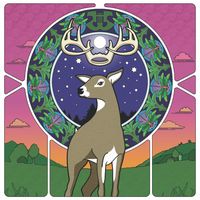 March and the Muse with Kendra Swanson

One of our favorites, Kendra Swanson will bring her extraordinary music down from Wisconsin to Rosbrook Studio for this fabulous show! Singer/songwriter Jody McGill of Hanover will open the show and the show will wrap with local group, "Incredible Folk" with Kendra sitting in on fiddle! This will be Special!

Entry for this show is $8 - seating is limited! Be sure to come early! Doors open at 6pm and showtime is 7pm Beverages and Pizza by Mama Cimino's

Check out the event posts for pictures and bios for these musicians and artists!

Hailing from the fertile land of Wisconsin, Sarah Vos and Daniel Wolff met as youths sharing a similar sense of disenchantment having just dropped out of college and living again in the rural city of Oshkosh. A time of deep reflection – coming to terms with sexuality and needing to find an identity outside of their families’ evangelical rhetoric – they forged ahead on their own, acoustic instruments in hand. They haven’t looked back since meeting nearly a decade ago (and have traveled most of North America in the process), but their songs, filled with both trauma and triumph, despair and hope, are just as much a reflection on the past as they are optimistic in brighter days to come.

First introduced to a national audience through tours with Trampled by Turtles and Mandolin Orange, Dead Horses have performed on such legendary stages as Red Rocks Amphitheater, and at festivals from Northwest String Summit to Red Wing Roots, Red Ants Pants to Bristol Rhythm and Roots.

Known for frontwoman Vos’ “aching, haunting vocals” (No Depression) and “evocative, empathetic storytelling” (NPR Music), Dead Horses’ sound bridges indie folk and their own Midwestern approach to Americana. Lyrically, the band explores the human condition from personal musings to observations of the current American experience, taking notes from every person and city they meet along the road.

Their critically acclaimed third album, My Mother the Moon, earned profiles from Billboard to Noisey to Democracy Now!, spots in Folk Alley’s and No Depression's "Best Folk/Roots Albums of 2018" lists, and Rolling Stone Country declared them an "Artist You Need to Know."

And it seems word made its way to London, as The Who selected Dead Horses as one of a handful of U.S. bands to open for them on their symphonic Moving On! tour this fall.

Kendra Swanson is an independent folk music performer and songwriter. With strong, expressive vocals and energetic instrumentation on banjo, guitar, and fiddle, she applies a timeless sound to original compositions written from (and about) the American heartland. It has been described as "soulful," "homey," "sincere," and "heartfelt," delivered with a passionate voice that cuts through the loudest of bars (and the hardest of hearts). Her reputation as a leader of singalongs, enthusiastic storyteller, and humorist have made her performances a sought-after experience for a wide variety of audiences. As a soloist, she has shared bills with the likes of Charlie Parr, Chicago Farmer, The Waydown Wanderers, The Howlin' Brothers, Danny Barnes, the Quebe Sisters, The Nitty Gritty Dirt Band, and the incomparable Jerry Douglas.